The blackest day in the history of the club occured in May 1958.

At an early season training session, Roy Glasson was swimming out with the belt in a simulated rescue. Suddenly it was realised that all was not well, and despite the speed with which he was brought back to the beach, he could not be resuscitated.

Roy was held in the highest esteem, not only in the club, but also by the rest of the village, as was shown by the large numbers attending the memorial service which the Rev. Joe Ridholls conducted in the Methodist Church. The best memorial the club could think of was to continue our work in the spirit which Roy himself would have wanted. Girlie and David joined us in this effort, and we managed to pull through a very difficult time.

August 1958 saw our first ‘Surf Carnival‘, with parties and team events on the beach at St Agnes. Events were held during the week including an Open Air Dance, a Barbeque, a Surfers Dance in the Church Hall (admission 1/6d or 7.5 pence) and after the carnival on Saturday another Barbeque with a sing-song as always led by Alan Thomas.

Porthtowan won the event with the home side coming second, Bude in third and our B team in fourth. We welcomed Alan Sargent from North Bondi to this event, and it was good to have some personal contact with our adopted club in Australia.

With three incidents at Praa Sands alone, concern reached a peak during the summer as the number of deaths by drowning, mainly on unpatrolled beaches, was escalating. 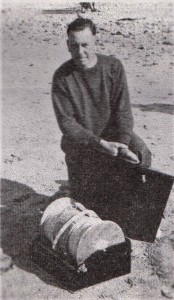 Cyril and the Hicks Reel

It was felt that action was called for, and that Surf Life Savers should spearhead developments. After a county conference in Truro, Cyril Hicks came up with the design of a small, portable reel including 250 metres of nylon line and detailed instructions to avoid problems when used by the general public.

A prototype was produced by Cyril and Paul James and demonstrated at St Agnes Beach in the summer of 1959. Known as the Hicks Reel this design was adopted by many authorities in Cornwall, Devon and the Channel islands, greatly contributing to the safety of unmanned beaches.

Next: The Sixties; Surfboards & Success